Recently I read Sapiens: A Brief History of Humankind

by Yuval Harari. The basic thesis of the book is that humans require ‘collective fictions’ so that we can collaborate in larger numbers than the 150 or so our brains are big enough to cope with by default. Collective fictions are things that don’t describe solid objects in the real world we can see and touch. Things like religions, nationalism, liberal democracy, or Popperian falsifiability in science. Things that don’t exist, but when we act like they do, we easily forget that they don’t.

Collective Fictions in IT – Waterfall

This got me thinking about some of the things that bother me today about the world of software engineering. When I started in software 20 years ago, God was waterfall. I joined a consultancy (ca. 400 people) that wrote very long specs which were honed to within an inch of their life, down to the individual Java classes and attributes. These specs were submitted to the customer (God knows what they made of it), who signed it off. This was then built, delivered, and monies were received soon after. Life was simpler then and everyone was happy. Except there were gaps in the story – customers complained that the spec didn’t match the delivery, and often the product delivered would not match the spec, as ‘things’ changed while the project went on. In other words, the waterfall process was a ‘collective fiction’ that gave us enough stability and coherence to collaborate, get something out of the door, and get paid. This consultancy went out of business soon after I joined. No conclusions can be drawn from this.

Collective Fictions in IT – Startups ca. 2000

I got a job at another software development company that had a niche with lots of work in the pipe. I was employee #39. There was no waterfall. In fact, there was nothing in the way of methodology I could see at all. Specs were agreed with a phone call. Design, prototype and build were indistinguishable. In fact it felt like total chaos; it was against all of the precepts of my training. There was more work than we could handle, and we got on with it. The fact was, we were small enough not to need a collective fiction we had to name. Relationships and facts could be kept in our heads, and if you needed help, you literally called out to the room. The tone was like this, basically: 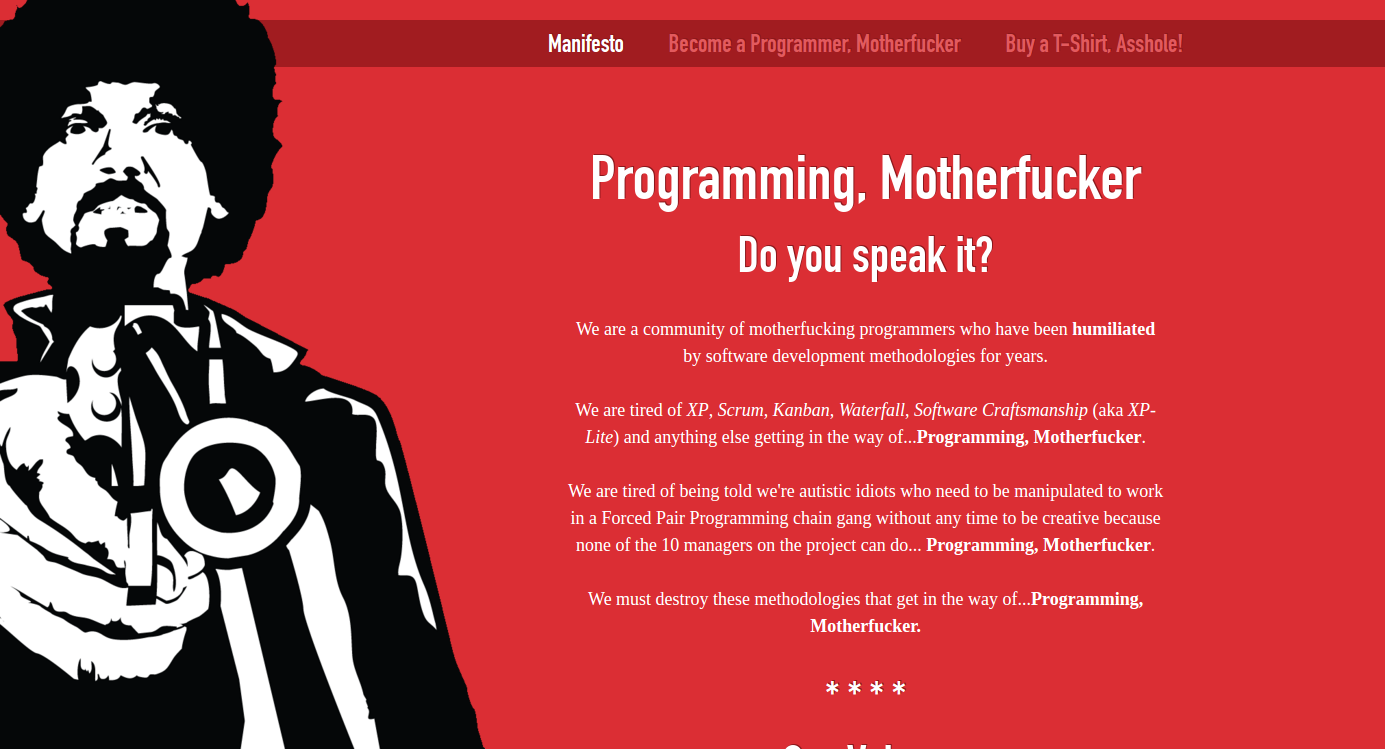 Of course there were collective fictions, we just didn’t name them: We got slightly bigger, and customers started asking us what our software methodology was. We guessed it wasn’t acceptable to say ‘we just write the code’ (legend had it our C-based application server – still in use and blazingly fast – was written before my time in a fit of pique with a stash of amphetamines over a weekend. It’s still in use.) Turns out there was this thing called ‘Rapid Application Development’ that emphasized prototyping. We told customers we did RAD, and they seemed happy, as it was A Thing. It sounded to me like ‘hacking’, but to be honest I’m not sure anyone among us really properly understood it or read up on it. As a collective fiction it worked, because it kept customers off our backs while we wrote the software. Soon we doubled in size, moved out of our cramped little office into a much bigger one with bigger desks, and multiple floors. You couldn’t shout out your question to the room anymore. Teams got bigger, and these things called ‘project managers’ started appearing everywhere talking about ‘specs’ and ‘requirements gathering’. We tried and failed to rewrite our entire platform from scratch. Yes, we were back to waterfall again, but this time the working cycles were faster and smaller, and the same problems of changing requirements and disputes with customers as before. So was it waterfall? We didn’t really know.

Collective Fictions in IT – Agile

I started hearing the word ‘Agile’ about 2003. Again, I don’t think I properly read up on it… ever, actually. I got snippets here and there from various websites I visited and occasionally from customers or evangelists that talked about it. When I quizzed people who claimed to know about it their explanations almost invariably lost coherence quickly. The few that really had read up on it seemed incapable of actually dealing with the very real pressures we faced when delivering software to non-sprint-friendly customers, timescales, and blockers. So we carried on delivering software with our specs, and some sprinkling of agile terminology. Meetings were called ‘scrums’ now, but otherwise it felt very similar to what went on before. As a collective fiction it worked, because it kept customers and project managers off our backs while we wrote the software. Since then I’ve worked in a company that grew to 700 people, and now work in a corporation of 100K+ employees, but the pattern is essentially the same: which incantation of the liturgy will satisfy this congregation before me?

I’m not going to beat up on any of these paradigms, because what’s the point? If software methodologies didn’t exist we’d have to invent them, because how else would we work together effectively? You need these fictions in order to function at scale. It’s no coincidence that the Agile paradigm has such a quasi-religious hold over a workforce that is immensely fluid and mobile. (If you want to know what I really think about software development methodologies, read this because it lays it out much better than I ever could.) One of many interesting arguments in Sapiens is that because these collective fictions can’t adequately explain the world, and often conflict with each other, the interesting parts of a culture are those where these tensions are felt. Often, humour derives from these tensions.

‘The test of a first-rate intelligence is the ability to hold two opposed ideas in mind at the same time and still retain the ability to function.’ F. Scott Fitzgerald

I don’t know about you, but I often feel this tension when discussion of Agile goes beyond a small team. When I’m told in a motivational poster written by someone I’ve never met and who knows nothing about my job that I should ‘obliterate my blockers’, and those blockers are both external and non-negotiable, what else can I do but laugh at it?

How can you be agile when there are blockers outside your control at every turn? Infrastructure, audit, security, financial planning, financial structures all militate against the ability to quickly deliver meaningful iterations of products. And who is the customer here, anyway? We’re talking about the square of despair:

When I see diagrams like this representing Agile I can only respond with black humour shared with my colleagues, like kids giggling at the back of a church.

When within a smaller and well-functioning functioning team, the totems of Agile often fly out of the window and what you’re left with (when it’s good) is a team that trusts each other, is open about its trials, and has a clear structure (formal or informal) in which agreement and solutions can be found and co-operation is productive. Google recently articulated this (reported briefly here, and more in-depth here).

You might think the answer is to come up with a new methodology that’s better. It’s not like we haven’t tried:

So I’m cool with it. Lean, Agile, Waterfall, whatever, the fact is we need some kind of common ideology to co-operate in large numbers. None of them are evil, so it’s not like you’re picking racism over socialism or something. Whichever one you pick is not going to reflect the reality, but if you expect perfection you will be disappointed. And watch yourself for unspoken or unarticulated collective fictions. Your life is full of them. Like that your opinion is important. I can’t resist quoting this passage from Sapiens about our relationship with wheat: ‘The body of Homo sapiens had not evolved for [farming wheat]. It was adapted to climbing apple trees and running after gazelles, not to clearing rocks and carrying water buckets. Human spines, knees, necks and arches paid the price. Studies of ancient skeletons indicate that the transition to agriculture brought about a plethora of ailments, such as slipped discs, arthritis and hernias. Moreover, the new agricultural tasks demanded so much time that people were forced to settle permanently next to their wheat fields. This completely changed their way of life. We did not domesticate wheat. It domesticated us. The word ‘domesticate’ comes from the Latin domus, which means ‘house’. Who’s the one living in a house? Not the wheat. It’s the Sapiens.’ Maybe we’re not here to direct the code, but the code is directing us. Who’s the one compromising reason and logic to grow code? Not the code. It’s the Sapiens.

Buy in a bundle here

If you enjoyed this, then please consider buying me a coffee to encourage me to do more.

65 thoughts on “My 20-Year Experience of Software Development Methodologies”