Since I work a lot with clustered VMs, I’ve ended up spending a lot of time trying to figure out how DNS lookups work. I applied ‘fixes’ to my problems from StackOverflow without really understanding why they work (or don’t work) for some time.

Eventually I got fed up with this and decided to figure out how it all hangs together. I couldn’t find a complete guide for this anywhere online, and talking to colleagues they didn’t know of any (or really what happens in detail)

So I’m writing the guide myself.

Other posts in the series:

These posts are intended to break down how a program decides how it gets an IP address on a Linux host, and the components that can get involved. Without understanding how these pieces fit together, debugging and fixing problems with (for example) dnsmasq, vagrant landrush, or resolvconf can be utterly bewildering.

It’s also a valuable illustration of how something so simple can get so very complex over time. I’ve looked at over a dozen different technologies and their archaeologies so far while trying to grok what’s going on.

I even wrote some automation code to allow me to experiment in a VM. Contributions/corrections are welcome.

Note that this is not a post on ‘how DNS works’. This is about everything up to the call to the actual DNS server that’s configured on a linux host (assuming it even calls a DNS server – as you’ll see, it need not), and how it might find out which one to go to, or how it gets the IP some other way.

1) There is no such thing as a ‘DNS Lookup’ call

This is NOT how it works

The first thing to grasp is that there is no single method of getting a DNS lookup done on Linux. It’s not a core system call with a clean interface.

There is, however, a standard C library call called which many programs use: getaddrinfo. But not all applications use this!

They both get the same result, so they must be doing the same thing, right?

Here’s the files that ping looks at on my host that are relevant to DNS:

and the same for host:

You can see that while my ping looks at nsswitch.conf, host does not. And they both look at /etc/resolv.conf.

We’re going to take these two .conf files in turn.

We’ve established that applications can do what they like when they decide which DNS server to go to. Many apps (like ping) above can refer (depending on the implementation (*)) to NSSwitch via its config file /etc/nsswitch.conf.

(*) There’s a surprising degree of variation in
ping implementations. That’s a rabbit-hole I
didn’t want to get lost in.

NSSwitch is not just for DNS lookups. It’s also used for passwords and user lookup information (for example).

NSSwitch was originally created as part of the Solaris OS to allow applications to not have to hard-code which file or service they look these things up on, but defer them to this other configurable centralised place they didn’t have to worry about.

The ‘hosts’ line is the one we’re interested in. We’ve shown that ping cares about nsswitch.conf so let’s fiddle with it and see how we can mess with ping.

If you set the hosts line in nsswitch.conf to be ‘just’ files:

Then a ping to google.com will now fail:

since, as we saw, it doesn’t care about nsswitch.conf

If you set the hosts line in nsswitch.conf to be ‘just’ dns:

Then a ping to google.com will now succeed again:

But localhost is not found this time:

Here’s a diagram of what’s going on with NSSwitch by default wrt hosts lookup: 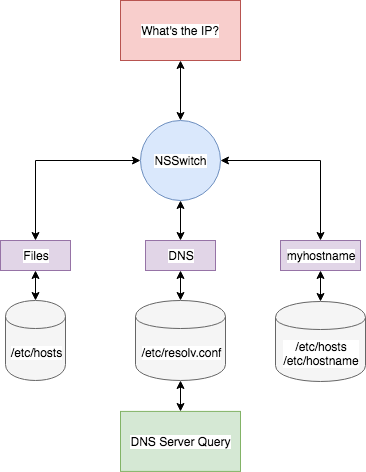 My default ‘hosts:‘ configuration in nsswitch.conf

We’ve seen now that host and ping both look at this /etc/resolv.conf file.

Ignore the first two lines – we’ll come back to those (they are significant, but you’re not ready for that ball of wool yet).

The nameserver lines specify the DNS servers to look up the host for.

If you hash out that line:

it fails, because there’s no nameserver to go to (*).

This file takes other options too. For example, if you add this line to the resolv.conf file:

and then ping google (sic)

it will try the .com domain automatically for you.

End of Part I

That’s the end of Part I. The next part will start by looking at how that resolv.conf gets created and updated.

Here’s what you covered above:

If you thought that was complicated, buckle up…

If you enjoyed this, then please consider buying me a coffee to encourage me to do more.

24 thoughts on “Anatomy of a Linux DNS Lookup – Part I”