As a Docker enthusiast that works for a corp that cares about security, SELinux is going to be a big deal. While SELinux is in principle simple, in practice it’s difficult to get to grips with. My initial attempts involved reading out of date blogs for tools that were deprecated, and confusing introductions that left me wondering where to go.

Fortunately, I came across this blog, which explained how to implement an SELinux policy for apache in Docker.

I tried to apply this to a Vagrant centos image with Docker on it, but kept getting into a state where something was not working, but I didn’t know what had happened, and then would have to re-provision the box, re-install the software, remember my steps etc etc..

So I wrote a ShutIt script to automate this process, reducing the iteration time to re-provision and re-try changes to this SELinux policy.

See it in action here

This diagram illustrates the way this script works. 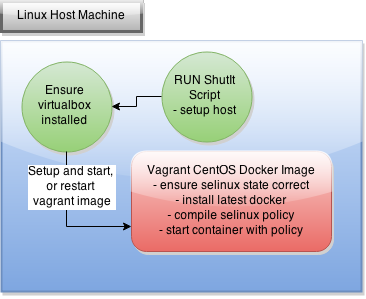 Once ShutIt is set up, you run it as root with:

The ‘build’ argument tells ShutIt to run the commands in the to the revelant delivery target. By default this is Docker, but here we’re using ShutIt to automate the process of delivery via bash. ssh is also an option.

Running is root is obviously a risk, so be warned if you experiment with the script.

The script is here. It’s essentially a dynamic shell script (readily comprehended in the build method), which can react to different outputs. For example:

only calls ‘vagrant init’ if there’s no Vagrant file in the folder. Similarly, these lines:

send ‘vagrant status’ to the terminal and will call ‘vagrant up’ if the status returns anything that isn’t indicating it’s already up. So the script will only bring up the VM when needed.

pick up the config items set in the get_config method, and uses them to determine where to deploy on the host system and whether to fully enforce SELinux on the host.

Crucially, it doesn’t destroy the vagrant environment, so you can re-use the VM with all the software on it pre-installed. It ensures that the environment is cleaned up in such a way that you don’t waste time waiting for a long re-provisioning of the VM.

By setting the vagrant directory (which defaults to /tmp/vagrant_dir, see below) you can wipe it completely with an ‘rm -rf’ if you ever want to be sure you’re starting afresh.

Here’s the invocation with configuration options:

The -s options define the options available to the docker_selinux module. Here we specify that the VM should have setenforce set to off, and the vagrant directory to use is /tmp/tmp_vagrant_dir.

Instructions on setup are kept here

Then clone the docker-selinux repo and run the script:

Note you may need to alter this line

file to change ‘docker’ to ‘sudo docker’ or however you run docker on your host.

This has considerably sped up my experimentation with SELinux, and I now have a reliable and test-able set of steps to help others (you!) get to grips with SELinux and improve our understanding.