Make Your Own Bespoke Docker Image

Recently, a few ideas around Docker converged in my mind and led me to make my own distribution, and to enable others to do the same. Hear me out.

Putting all the above together I realised that with the advent of Docker there was less of a need to bother with traditional packaging systems at all. Why not build from source?

“Because it’s bloody hard, bloody time-consuming, and bloody painful” is the standard answer. But since you can reproduce builds at will deterministically and deploy later elsewhere, much of that difficulty can be offloaded to someone else. Add in Docker’s layered filesystem, and these other issues become easier:

all built from source and with a full bash history available for reference.

Here is the sequence of commands to get from debian:jessie (docker pull imiell/sd_base) to the sd_base filesystem artifact lfs.tar.xz (see below). Empty lines indicate just hitting return to accept defaults.

Here is the sequence of commands to get from imiell/sd_base to a complete working OSQuery image.

And here’s an example of how to run the OSQuery image:

Since the environment is so predictable and restricted, certain aspects of the dependency management process become simpler.

ShutIt allows you to produce dependency graphs of your modules with the sc (show config) sub-command. Here is a gist example.

Here’s a (big – get ready with the zoom!) image of all the dependencies for the whole of the ShutIt-Distro module “universe” as it stands today:

and a much smaller one just for the modules needed for the OSQuery module:

and NodeJS‘s much simpler one (bear in mind that the base image has a base toolchain et al in it:

Build Your Own Image From Source

Want to cherry pick your own image, with tools and editors to your fancy? Instructions here, raw cut and paste for Ubuntu here You’ll be presented with a sparse web interface like this: 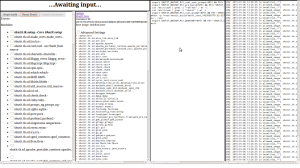 On the left are the modules in strict dependency order. At the bottom are the more complex modules. If we take OSQuery as an example, clicking on that will cause all the dependent modules to be emboldened (this can take a few seconds if there are lots of deps):

You can add any other modules you like to your image. So if you’re an emacs user, you can tick that box and it’ll be added also. This way you can configure your own personalized image. Then scroll back up and click on “Begin Build” to kick off the build. The commands issues will be on the third pane, the log on the fourth.

When the build is complete, it can be downloaded as a tar file by clicking on “Export Container”, which you can use to load in like so:

which will import the image ready to run. Using the web interface is not required, but it’s obviously easier than using the command line and configs, and is a good intro to the ShutIt framework.

How the Base Toolchain Image is Produced

Initially I tried to build the entire toolchain within debian:jessie, but got myself into hot water pretty quickly. Turns out building a toolchain from scratch is quite hard. Thankfully, Automated Linux From Scratch exists, so I just used that.

That delivers an artifact called lfs.tar.xz to the filesystem which can be picked up to make a base image with this Dockerfile:

The base image is then delivered to the Docker Hub here. This forms the basis for the ShutIt Distro. Here is a gist for the commands to do this yourself. Note: it takes a while!

If you’ve read this far and are still interested, do get in touch.

5 thoughts on “Make Your Own Bespoke Docker Image”